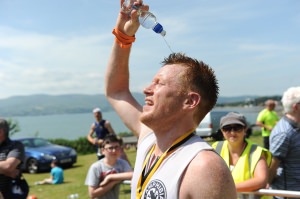 Amphibia’s founder Adrian McGreevy dream’t for many years of owning his own sports equipment company, as he had a few ideas for innovative products. However the company actually evolved due to 2 seemingly unfortunate incidents – a bad injury and losing his job!

After playing football and numerous other sports since a child Adrian was involved in a skiing accident and bruised his spinal cord. Advised to give up all contact sport immediately he was devastated and lost his love for sport for a time. But an appreciation of how lucky he was still to be able to participate and enjoyment of endurance sports led Adrian towards running and marathons, and eventually triathlon and watersports.

Shortly afterwards Adrian lost his job but actually it gave him the perfect opportunity to realise his dream and Amphibia was born in 2010. After a successful appearance on ‘Dragons Den’ the following year Amphibia has continued to spread around Europe and further afield, and also grow its portfolio of products. The success of the brand is largely due to the support of retailers and athletes who trust the brand and appreciate its functionality, innovativeness and affordability. Amphibia – evolution its only the beginning!