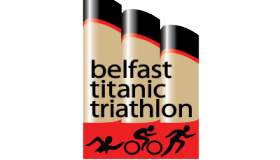 I got to race Belfast Triathlon this year, which was a real privilege as I have attended it for the past 3 years working but this is the first year I’ve actually got to take part. Based around the centre of one of the most iconic cities in Europe this should certainly be on the bucket list for many British and Irish triathletes and there were many participants from even further afield.

Numbers were close to the thousand mark, which is slightly down on previous years but these seems to be a standard result across the board for triathlon in UK and Ireland.  Despite the fact that triathlete numbers and members are increasing each year many events are struggling to maintain numbers, whether due to oversupply of events or people just doing less events. To broaden the reach of the event this year organiser’s Community Multisports built a bigger sports theme around the original triathlon and had separate Swim Belfast and Run Belfast events.  These coincided with the triathlon so no new infrastructure wasn’t required and it got lots more people involved, many of whom i’m sure would plan to do a triathlon in the future.  Whilst numbers for these additional events weren’t huge it was very worthwhile and a format that should be replicated by other events nationwide.

My preparation for the race was pretty good, I had a very tough Olympic distance race the weekend before at Top of the Mourne with a bouncy swim, a leg killer of a cycle over the mountains and a tasty up and down run around Kilbroney Park, completed in 2hr 38mins and 35th place.  Plenty to improve on and I knew Belfast would be a lot flatter! Thankfully the weather forecast was also looking good as the 2015 race, like a lot of other races I attended last year was an absolute washout, cold and wet, leaving a lot of people feeling very blue! So the morning of the 31st arrived and I had a much clearer head than most years as my birthday is on the 30th! With a bit of forward planning this year the celebrations happened the weekend before so I was fresh as a daisy and chomping at the bit to get going. I love sponsoring and competing in the same races, it gives an added incentive to perform and it’s also nice to know you are adding something to the race. It was also nice to be able to show off all of the expanded Amphibia product range during registration. 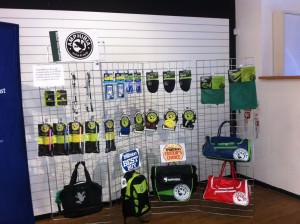 The race is centered right in the middle of Belfast so is a great way to see the city.  The transition is as good as any i’ve ever seen, based in Custom House Square with smooth concrete floor and a natural amphitheater. Then it’s just a short step into the Lagan River. Having swam previously in the Thames and Liffey, these rivers don’t fill with me with dread as they do a lot of people.  They are much cleaner than they used to be and less swell and jellyfish than sea swims so they normally offer a good time. The Belfast swim has one big loop to complete and whilst its quite tight it means you cant go too far off course! Swimming never being my strong point, I was happy with 30mins, which was a couple of minutes off an albeit tougher swim the week previous.

The cycle is 2 loops out past Titanic Quarter and around a large industrial estate.  It’s a fairly boring course but at least the loops mean you get to go past the city center crowds again at the half way point.  It’s also very flat so there were a lot of aero lads with good times and only on 1 small section of the course was wind a factor at all. The biggest problem were a few ramps around the Industrial Estate but they are the same for everyone. I knocked a full 14 minutes off my bike time from the previous week, but this is fairly normal considering the difference in gradient between the 2 courses.

So off the bike into transition and my biggest issue of the day.  I now have the routine of cycling with no socks but then putting them on before the run. It means you aren’t coming out of the water and fiddling with cold hands but adds an extra bit of comfort before the run, avoiding blisters etc, which I have an issue with when running anything over 5km. I also find the few seconds it takes to do this and kneel/sit down on my Amphibia Dry Mat also helps my lower back and gets me ready for the run. So my socks slipped on easy enough and I had nice new Brooks trainers which I was looking forward to stretching out in…. if I could get them on! For some reason they have shortened the tongue and it is rubber so very hard to adjust especially when you are in a rush!  After struggling with them for a few seconds I had no choice but to undo the lace and then put back on – far from ideal when every second counts and added about a minute to my transition time. I tried not to let it annoy me and it served as a bit of extra incentive to run faster!  It’s a nice flat and fast run course and whilst im not normally a fan of 4 loops it’s worth it for the scenic course around the city hall and tonnes of tourists looking at you and wondering what the hell you are doing in a Sunday morning! By the end it was quite warm but I always wear a cap or scarf which helps keep the sweat out of your eyes.  My aim was a sub-40 minute 10km which I managed, whilst knocking off 5 minutes from my run the previous week. All rounded off with a sore sprint finish against a couple of guys that just woke up when I passed them, the reason for my suffering face below 🙂  Well worth it for the Non Alcoholic Beer and sandwiches at the finish line though. 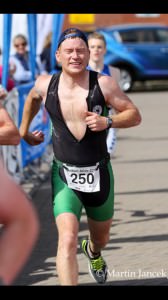 Overall it’s a great event, well organised and one well worth doing, considering the flat fast course & the city centre location and Belfast is a great place for a few drinks celebration afterwards if you are staying over.  It’s easy to get to from across the UK and Ireland and loads to see in the region.  Also a good course for a new PB which I managed in 2hrs18mins and have since bettered again a few weeks later at the equally scenic Carlingford Triathlon.  Nice to see i’m getting faster with age, I could be a real challenger with a new pair of trainers and if I could learn to swim!

One Response to “Belfast Titanic Triathlon”