Cycling The Ras – from the An Post CRC Cycling Team

Cycling The Ras – from the An Post CRC Cycling Team 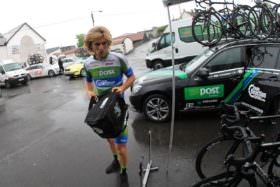 Highlights from Sean McKena, specifically for Amphibia – bag sponsors to the team. 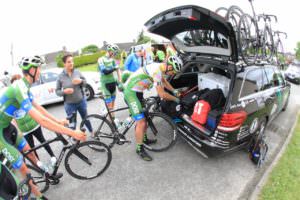 The highlight of the race was probably stage 3 for me. I’ve never put my hands up for 10th place before but I was just over the moon with Matty winning the stage and how we rode that stage as a team. It was like clockwork. Stage 8 was something similar. We rode perfectly as a team and it was great to see Kasper win. He really deserved that!

It’s hard to pick a low point of the week but losing the yellow jersey and our chance at the GC on stage 5 was disappointing. Even though we did lose our chance at GC, Regan won the stage so the low point wasn’t too bad!

The toughest day was probably stage 7. 165km in nonstop rain was just no craic. Thankfully we all got around safe and Regan got 3rd on the stage but it was no fun at all to be honest. It was just one of those days you wanted to be over as soon as possible.

The easiest days were days when the lads won stages. They were probably the stages we worked hardest for but as soon as the lads get the hands in the air it’s all worth it and those days seem easy as a result.

The moment that stood out was seeing Kurt (Team Manager) getting emotional after Matty’s win on stage 3. Who knew Kurt had a soft side !

Proud to be bag supplier to these amazing cyclists and great team, fantastic result and good luck for the rest of the season!