Ive raced and sponsored Dublin City Triathlon for the past 6 years and its one of the highlights of the Irish Triathlon calendar, having won ‘Race of the Year’ on numerous occasions. The combination of city centre location, closed roads, a fairly ‘flat’ route, a calm river swim and good atmosphere ensure its always a popular event.  2016 was no different and as well as triathletes from all over Ireland there was plenty of UK triathletes taking part and further afield (Germany, Canada and Italy to name a few).  2015 race day had been a washout, and the high volume of rain in the lead-up to the event also meant higher probability of catching some nasty germs in the Liffey river, so thankfully 2016 was a much drier affair!

Organisers hadn’t rested on their laurels this year and there were a few changes to the race route. The swim was reversed from previous years meaning a short downriver, followed by a long upriver and then back downriver again.  The cycle route had just a small change in terms of turning point and the run route had the biggest difference, changing from a trail run in previous years to a road run, albeit a slightly hillier one and the finish line was back at transition instead of Phoenix Park where it had been in previous years.  First off was the Category One sprint triathlon, where the top triathletes in the country get to race it out in a draft legal race.  Always great to see these folks at top speed and something for the rest of us to aim for. The mens race was won by the flying Chris Mintern who edged out 2 GB triathletes Rogers & Byram on the podium. In the woman’s race Susanna Murphy beat Carolyn Hayes and 3rd place GB athlete Mary Hodgson

The Olympic distance transition closed at 8am but my race didn’t start until 10am, so it meant even I had plenty of time to prepare, although most of that time was spent putting up banners and flags! I had slightly twisted my ankle the day before so wasn’t entirely sure how it would respond to racing but decided that even a swim and cycle was a worthwhile training session.  The race schedule ran smoothly and the races started on time so off we went at 10am.  The change in swim direction didn’t make much difference just a slightly messier first buoy but it was nicer being able to swim directly out at the end instead of having to do a loop past the exit pontoon.  Despite foggy goggles (must buy a new pair!) I felt like I had a decent swim so was disappointed to see a time of 31 minutes. Some of these days im going to start setting aside more time for swimming, but it always seems like a chore compared to cycling and running! Not a great day for my new wetsuit – put a hole in it pulling it on and then couldn’t get it off in transition… more practice needed!

Anyway off onto the bike and got into a nice steady rhythm for the 4 laps, proven by the fact that my laps were nearly exactly the same time.  With only 1 slight uphill that has to be repeated 4 times and lots of smooth and fast downhills it’s a great course particularly when its dry and no wind. With the help of some caffeine and a couple of gels I was happy enough with a time of 1hr 5 mins and I was happy not to have to go up that hill again! I could feel my ankle on the bike but it wasn’t hurting so I decided to chance the run.  The ankle wasnt helped with further issues getting my runners on in transition! You can read about my previous issues with a new pair of runners during Belfast Triathlon here.  Finding my position in the large transition area was helped with my bright orange Dry Mat for changing, even though someone else also had one nearby! 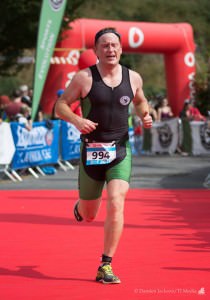 I had planned to take it easy on the run but of course competitiveness takes over and I went pelting out of transition with thankfully no adverse reaction from my ankle. Normally I would much prefer the old trail run course as it suits me more than others, but on this occasion I was happy to keep on the road as it meant more even ground and less chance of going over on my ankle again. The new course is two loops of a small uphill, followed by a long straight drag slightly uphill and then a nice downhill in the opposite direction to the cycle route. I burned it a little too much on the first downhill and was hurting on the second loop but before you know it you are on the downhill again and then it’s a flat 500mtrs to the finish line, just hoping nobody passed me at this stage as I didn’t have the energy to react. Slightly disappointed with 41mins for the run as my last 2 Olympic races have been sub-40 runs but this was a hillier run. I had an overall race time of 2hrs 22mins and happy enough with my bike and run times but plenty to work on in terms of my swim and transition times. I was pleasantly surprised (so was everyone else) to gain 3rd place in my new age group (who said getting old was a bad thing).  I don’t get onto many podiums so to achieve it at one of the top races in the country was particularly enjoyable.  Next for me is the Lost Sheep Half Iron distance race, which will wrap up my triathlon year in plenty of time for Baby No.2 arriving in a few weeks…. That might slow up the training a little  🙂 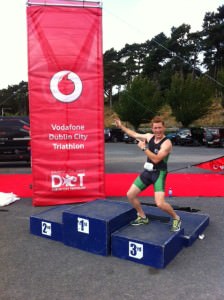 However the biggest surprise of the day was kept for this unfortunate cyclist! Shane O’Reilly was pushing up the hill when a stagg decided it had right of way! Deer are a well known attraction in Phoenix Park but its wise not to get too close, thankfully this was on the uphill when he wasnt going too fast and Shane was able to finish the race. The deer can certainly run fast, i wonder can he swim and cycle?? Deer deer… 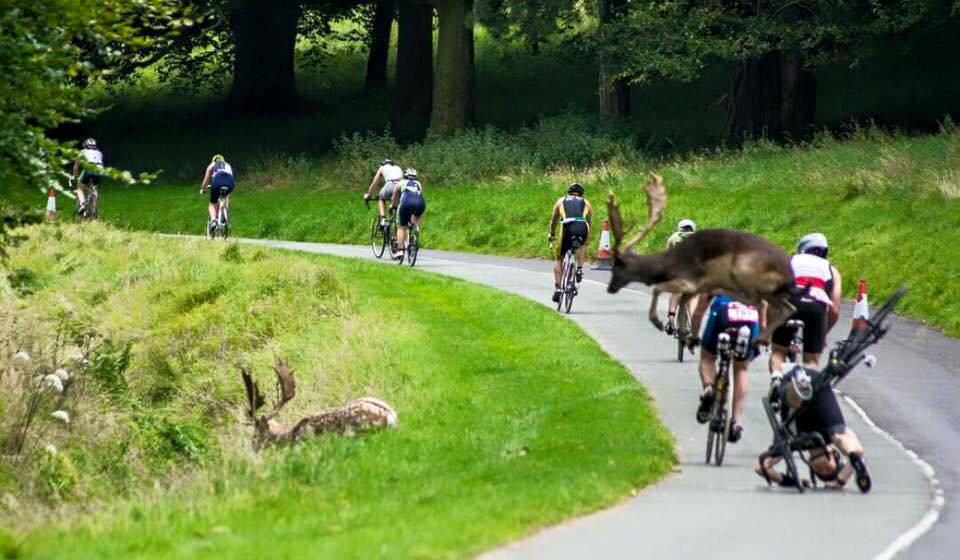