Everyone Should Do a Triathlon!

Everyone Should Do a Triathlon! 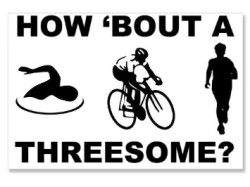 OK it’s slightly controversial but I think everyone should do a triathlon during their life, or at the very least anyone who participates in sport should do one!  It teaches you so much and you get such a sense of achievement.  But the same can be said for many sports, just why do I think triathlon can be so important?

The sports that are involved – swimming and cycling are widely regarding as 2 of the most beneficial sports that you can partake in and running has long been heralded as one of the easiest and best fat burning activities you can do. Now don’t get me wrong its by no means one of the cheapest sports that you can do – bicycles, wetsuits, trainers etc don’t come cheap (unless you can get a lend of them), but you should get at least a few years wear out of the wetsuit and bike.  In terms of its effect on your fitness, general health, lifestyle and energy levels it’s well worth the cost. Swimming is generally people’s weakest discipline but if you have the basics you can progress well over a few months with some lessons (I got a couple of lessons and then just worked at it myself over the course of the winter… went from swimming less than 1 length of the pool to swimming 50 lengths in a couple of months). Cycling, well its like riding a bike isn’t it! Then most people can run some distance so it’s just a matter of building it up and avoiding injuries.  Its fine to walk some of it as well! 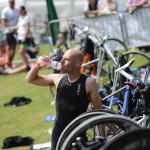 Triathlons – to do or not to do!

It’s achievable! Triathlon is becoming more mainstream with more and more people taking part, although it still has some of the awe factor when you tell people that you compete. Once you get to a basic level of fitness at the 3 sports you can easily complete a Tri-a-Tri event or even a sprint triathlon. There are many Tri-a-Tri’s popping up nationwide and their distances are approx 250mtr swim, 6km cycle and 3km run, so even with a minimum of training it’s possible to take part. Obviously the swim is potentially the scariest discipline for most people and there are swimming pool based races, but again with a little practise you can overcome any fears of open water swimming. 250mtrs is just 10 lengths of a normal swimming pool and you can stop and take a breather if you need to. I’ve even seen people backstroking during races!

It can be fun and anyone can take part at different levels. Many sports are for young people but you will see a wide variety of ages, shapes and sizes at a triathlon.  The top 10% of racers will be extremely competitive and aiming to win, but the other 90% are either competing against the clock or against friends / colleagues or just aiming to finish the race. Many races have prizes for different age categories.  You will always see loads of camaraderie at races and training and the all-important fourth sport for many is socialising and toasting your success! There are loads of clubs around the country that love to see new members and encourage you on your journey.  There are always a few headcases that inject a bit of fun into a club and trust me triathletes aren’t as narcissistic as we are made out to be J You get the benefit of team spirit but compete individually so nobody else can let you down (always one of my gripes with team sports).

One of my favourite aspects of triathlon is the variety of training.  Indeed it’s one of the reasons why I started the sport. I always loved running but the more that I did it the more bored I got and the more injuries that I picked up along the way! However the ability to intersperse run training with swimming and cycling immediately cured the impact and boredom of running.  Don’t get me wrong – running is still my favourite discipline and my strongest but the miles can get monotonous. In the same way I don’t think I could be a swimmer (or at least a decent swimmer) as swimming lanes and the never-ending turns just bore me if I do it too much! Open water swimming is better but still takes a lot of motivation to get the wetsuit on. And you don’t even have to stick to the 3 sports, you’ll learn about the importance of cross training, yoga and Pilates, gym work, core strengthening to name a few, but don’t worry they aren’t essential for novices.

You might be wondering how you can balance 3 sports alongside other commitments! Well it’s not easy, but is very rewarding and if you want to do it enough then you will find a way.  My weekly training schedule consists of an early morning or two (not many as im not a morning person), a couple of lunch-time training sessions, some evening work-outs and a couple of big chunks at the weekend. Again your competiveness will determine the hours you put in, but at the very least a few sessions a week will keep you fit and energised.  It should also help you to focus on work – life balance and countless times I have closed down the laptop as I have to do a training session! You might even learn to reduce or cut out some of the stuff out of your life that doesn’t matter… TV, Facebook or those friends and relatives that you don’t actually like 🙂

Competing – Some people will be happy to just participate in training and keeping fit, but for those of us that are competitive there is something for everyone.  There are literally hundreds of multi-sport events nationwide with something to tickle everyone’s fancy!  You can also build up the level of competition gradually, I like many others graduated from a Sprint Triathlon to Olympic, to Half Iron to Ironman over the course of 4 years, indeed some do it in much shorter times. If you prefer to stay at one distance that’s fine as well, there is a good variety in terms of difficulty, terrain, location, size etc.  Events range from under 100 people to 1,000’s of people, and from indoor competitions to rural seaside / mountain regions. Incidentally London Triathlon is the biggest in the world with 13,000 participants each year!

It helps you appreciate your surroundings. We are so lucky to have many of the places that we get to train and race. Many sports participants get to look at four walls, but we get to see some of the most beautiful locations in the country and not just look at the scenery but immerse ourselves in it! Serene beaches, beautiful lakes, glorious mountains are just the start, you also have the opportunity to run around some of our beautiful cities and landmarks on closed roads, whenever else would you get this opportunity? It’s also a great way of discovering new places and sometimes the scenery can take your mind off how tough the race is.

You can’t help but get a feeling of how lucky you are to be taking part.  Many times ive left a triathlon thinking just how blessed I was to participate.  It makes me appreciate my health, the level of fitness I have built up and the community I’ve become a part of.  This sense of appreciation makes you feel good, gives you confidence, can relieve stress and gets you in the mind-set to start training for your next race or building your fitness levels.

The ecstasy of finishing! For anyone that has ever finished a one-discipline race you’ll know how good it feels, all of the hard work, training, thinking and energy you have spent becomes worthwhile crossing that finish line.  Well imagine this times three! After a triathlon it feels like you have just finished 3 races within one so the buzz that you get is even better! For the shorter races you also wont have the exhaustion that comes with endurance races so you’ll have lots of energy to tell everyone about the race and even go celebrate – lap of honour anyone?!

So go do it and if you’ve already done it then go and get other people involved as well! By the way I think other multi-sport events such as Adventure Races and Obstacle Course Racing are just as beneficial, so if triathlon doesn’t float your boat or you don’t like swimming then these are a great alternative.  Again there are tonnes of these types of races held nationwide as well and clubs being established, just search in your local area. 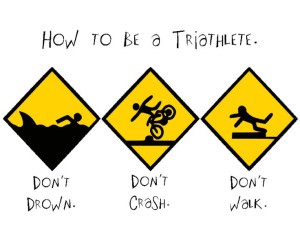 One Response to “Everyone Should Do a Triathlon!”