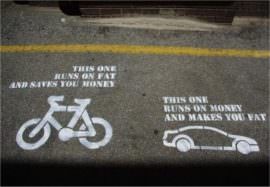 Freddy Mercury had the right idea years ago and cycling is really growing on me. I’m a late convert to the sport, as with most people I did a bit in my teenage years and even cycled the length of the country for charity but then grew out of it.  My twenties were about team sports and my thirties about running and triathlon which has gradually got me back interested in two wheels again. The sport as a whole has grown massively in recent years, largely due to increased prominence at the London Olympics and a successful Sky team winning multiple Tour De France races. We now have more cycling superstars that ever before – think Bradley Wiggans, Chris Hoy and the infamous Lance Armstrong! But just why is cycling so instinctive to us?

Cycling as a sport and leisure activity really sets human beings apart from animals.  Other animals can run, swim, jump and fly much better than we can but none of them can match us on 2 wheels!  Seriously though cycling embodies much of what is good about living – freedom, individuality, intelligence, progress. It’s close to the heart of human beings, almost visceral.  It marks one of the key childhood milestones when you finally break free from stabilisers and fly through the air on your own without assistance from anyone.  Invariably it also entails ending up on your backside numerous times, but we get up again and keep going, soon to overcome the nerves and fear.

It may surprise you to hear that cycling was only invented in the 19th century by a wily (or wheely) old German Baron who invented it as a horseless carriage. He couldn’t have imagined his “draisine” would have been so popular and led to the creation of the modern bicycle. He simply wanted to get around faster and he certainly achieved that but his invention also encapsulated the essence of freedom. Today billions of people worldwide use the bicycle in its many forms for work, leisure, sport, transport and travel. There is loads of great cycling gear now available with new accessories being invented every year.  We have our own range of scarves, waterproof cases, toe covers, backpacks and Gear Bags specifically for cycling.

Cycling isn’t all good, it does come with some issues. You are open to the elements of rain, snow, wind, ice and sun… and much more so than when moving by other means. Anyone who has got soaked on the way to work, or blown off the bike on a windy day or slipped on an icy patch will bear testament to this. Indeed by its very nature cycling is risky – you are increasing your speed and reducing the safety elements. The road surface probably won’t have a huge impact when you are in a car with four fat wheels but it has a massive impact on two skinny wheels. 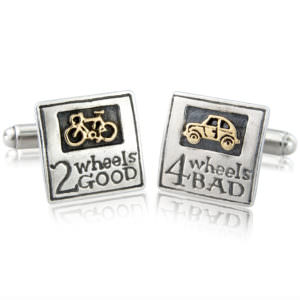 All wheels are good, but some are better than others 🙂

Potholes, wet or slippery patches, tram tracks and badly lit surfaces can all have a massive impact.  Punctures are inevitable and I was close to paying the local bike shop a weekly rate when I used to commute to the city centre. The attitude of vehicle drivers often leaves a lot to be desired and nearly every time I’m on my bike at least one driver will do something silly or downright dangerous, meaning cycling can be perilous and you really need to keep your wits about you constantly.  Vehicle drivers need to realise that cyclists may cost them a few extra minutes travel time but their actions can cost the life of a cyclist. They need to treat bikes like other vehicles, give them 1.5mtrs of clearance and expect the unexpected from them.

There are already 100 million bicycles manufactured worldwide each year! There is no doubt that cycling will continue to get more popular in the future. As cities get more crammed and we need to reduce our reliance on petrol people will need to find more sustainable ways to travel short distances.  One would hope the government would recognise this in future transport plans with increased cycling lanes and investment but we can’t be overly hopeful this will happen in the short-term.  One positive policy – Bike2Work – has increased bike sales but one would have to question its real effect on commuting rates.  Many doubted the wisdom of City Bikes schemes such as London Cycles and Dublin Bikes which replicated successful schemes elsewhere in Europe, but they have been fantastically successful and are being rolled out in other cities.

As a leisure pursuit there are a wide range of cycling pastimes that can be participated in including road cycling, mountain biking, track cycling, cyclocross, spinning, BMX & track cycling.  Then of course it’s also a big part of triathlon and adventure races.  The range of bike prices also offers much choice for consumers and whilst bikes aren’t cheap you will get more than your monies worth with regular use. They are often the best way to sightsee when visiting somewhere new and the range of cycling based holidays and tours are also on the rise. Cycling App Strava has just released details from 2016 with UK riders notching up 800 million kms of cycling during the year and an average of 38kms per journey.  Commuters managed an average speed of 22km per hour, much faster than many of their vehicular counterparts! But on these shores we naturally prefer warmer weather as participation increases markedly in the summer and bike commuting rates increase by 87%!

Competitive cycling isn’t for everyone, but there is something for everyone no matter what your age or ability.  Professional cyclists are recognised as being some of the fittest athletes across the sports spectrum and the Tour De France is seen by many as the ultimate test of fitness.  Whilst the sport has been dogged in recent years by drugs and doping scandals (did someone mention Lance?) it’s similar to the issues many sports are facing and is hopefully now being targeted and tested better though more still needs to be done to clean up the image of the sport.  However at a local and national level many clubs nationwide cater for experienced riders and ‘newbies’ alike and are very welcoming. There are a huge amount of races to take part in, many lacking a real competitive element such as ‘sportives’, charity cycles and ride-outs.  It’s a great way to meet new people and see beautiful parts of the country from the comfort of your saddle.

Cycling can also fit around your lifestyle, whether it’s commuting to work, going for a lazy or competitive spin with your friends, sightseeing, spending time with the family or even watching TV! I bought a Turbo Trainer a couple of years ago and have been surprised just how much use I have got out of it and it has really helped my fitness. It’s so easy to set my bike up on the stand and cycle away to my heart’s content, meaning I can mind the kids, watch the match or even read a book whilst I pedal away. It’s a great way to squeeze a small session into a busy evening or when I just cant face the rain outside. Club and group Turbo sessions are also on the rise and guaranteed to work up a sweat!

Cycling has many positive health effects – it’s mainly an aerobic activity, which means that your heart, blood vessels and lungs all get a workout. You will sweat, breathe deeper and increase your body temperature, which will improve your overall fitness level.  Cycling can also help protect you from serious diseases such as heart attack, stroke, cancers, depression, diabetes, obesity and arthritis. All in a fun, low impact friendly exercise for all ages and sizes.  I’m a runner at heart but it really takes its toll on your legs, back and joints so I can see myself running less and biking much more as I get older. Soon I hope to take the stabilisers off! 🙂

Get proper weather gear, you are going to need it and it will make everything more comfortable.

Make sure your bike is properly serviced and parts are in roadworthy condition.

Helmets and lights are a must! It’s not the law to wear a helmet but it should be. It is the law to have lights on your bike (and funnily enough a bell but we wont worry about that).

Use cycling lanes where they are provided and be courteous to other road and footpath users!

Cycle faster than your abilities.

Lose concentration and forget that it just takes one other person to make a mistake and you could be mincemeat.

Forget to lock up that bike well – there has been a huge increase in bikes being stolen from streets, homes and cars.