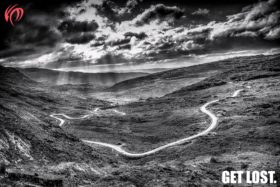 I absolutely love this race. Its tough, even tortuous, raw but rewarding, unforgiving and unforgettable.  Seven years ago was the first time i did it and i’ve been hooked ever since.  Its called Lost Sheep but there really is nowhere to hide in this race, its relentless and will swallow you up if you let it. But that’s why we do it these crazy things – it really is a race against the elements.  So why do i love this race so much? I’ve tried to instil below why after over a hundred triathlons completed this is still by far my favourite. 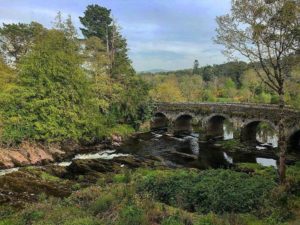 Beautiful views if you can enjoy them!

The first part of the race is getting an entry, as the race sells out each year in seconds the 400 competitors have done well even getting that far! I often wonder why the organisers haven’t tried to expand the numbers, add extra race distances etc but i’m sure not doing so is one reason why the race has stayed so special and so popular.  For most people its also a good trek to get to the race in one of the far corners of Ireland.  Registration is only available the night before so the race really takes over the small town of Kenmare. Even the mandatory race briefing the night before gets everyone together, heightens anticipation and ensures nobody sneaks in a good night’s sleep before the race 🙂  As i’m normally working at registration this invariably means grabbing a late pizza or pasta dish before bed…. not perfect race preparation but it does the trick.

To put my next opinion in context let me say first that i’m not a morning person and i’ll do anything to get a lie-in.  I much prefer afternoon races and do most of my training in the evening. But i love Lost Sheep Morning! A 7am race start means even late starters like myself have to aim to get to transition by shortly after 6am at the latest. Therefore it’s a rude awakening at 5.30am and a quick breakfast, after a short and restless night’s sleep.  This year my kind hostess left out porridge and milk for athletes but unfortunately no way to heat them so as raw porridge wasn’t on the menu most of us settled for bread and jam or bananas.  On the way to transition it’s still dark and rather eerie in the dead little town with no traffic and cyclists coming from all directions, like a zombie apocalypse happened the night before but they spared the fit ones. As daylight breaks over transition you can sense the nervous excitement of people and before long it’s time to get in the water. This year had predictions of bad weather earlier in the week but thankfully the overnight rain gave way to a bright and hopeful morning, slightly breezy but not cold.

My coach Sean from Infinity had recommended a nutrition plan that aimed for 60kgs of carbs per hour, rather than focusing on calories. I aimed for a combination of sources, 3 energy drinks, 2 energy bars & 4 energy gels with caffeine. This on top of a carb loaded breakfast, a pre-race banana and an electrolyte drink. 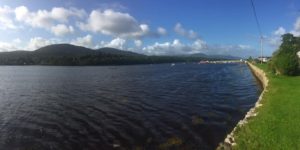 I swim like a runner so this is always going to be the slowest part for me.  However i still love the satisfaction of completing the swim and thinking that the hardest part is done.  Whilst this swim is fairly sheltered in Kenmare Bay it is still renowned for testing even the best swimmers.  In 2012 an unseasonably high tide meant dozens of people didnt finish the swim and my swim time was longer than my full Ironman swim the following year! And the swim is the easy part 🙂  Well this year was true to form and the swim was tough going. Whilst it looked calm from the shore it was pretty bouncy for the first five mins. My pre-race worries had been about goggles fogging up, but as soon as the race started my only thoughts were why the hell hadn’t i done any sea swims for 2 years! After the wavy start, the current was pulling us out but also sucking everyone to the inside of the first buoy, then way to the outside of the second buoy but as long as there are plenty of people round me im happy enough! It was a long way back to shore, it was hard to sight and a strong current against and i was disappointed to see 50mins on my watch.  However a quick chat with other racers and the general consensus was that the conditions had added between 6 and 12 minutes to previous year’s swim times i was happy enough.  Verdict – On reflection with an injury blighted summer my swim has probably got more focus than ever before and my stroke felt good during the race so my time was disappointing and really killed any chance of a sub 5hr race. Should have practised sea swims! 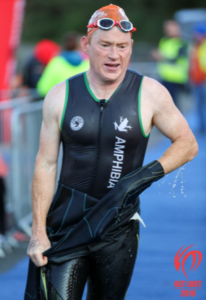 I dont look it but i was so happy to be out of the water!

The bike course for Lost Sheep is legendary with two category 1 hill climbs and plenty else besides. The views are out of this world and again if the conditions are bad it can feel like a very long 81km. The down-hills can be treacherous with slippy gravelly S bends, hairpin turns, tunnels and lost sheep! It’s a race where the downhill can be just as hard as the uphill particularly if you are cautious like me! Conditions were good this year, though the road was still wet and slippy in many places, there were pretty strong gusts of wind at the top of the hills and a few rain showers. I have to say ive never seen triathletes wearing as many clothes as this year on the cycle route, obviously preparing for the worst but i stuck with just my trisuit and didnt regret it. With the wet roads I was glad i was wearing my toe covers however!

The musical steel drummers at the top of the Healy Pass are always a highlight, an important symbol that you’ve completed the steepest climb of the day.  The roads were smoother than ever this year and i always find the flattest part of the ride the hardest – the last 14km as you just want to get off the bike at that stage!   Verdict – In previous years i would have done tonnes of hill work in preparation for this race, this year i only had 1 hilly training ride and no suitable warm-up races. Therefore coming into the race i wasn’t sure how i would handle the climbs.  I certainly didnt go as hard as previous years and Sean had recommended aiming for 7 out of 10 effort.   Thankfully the intense bike sessions done with Infinity although flat were some of the toughest i have ever done and succeeded in improving endurance and raising Vo2 Max. I’ve had quicker times on this bike course but in the absence of long sessions and appropriate hill training i was happy with my time and how i felt by the end. 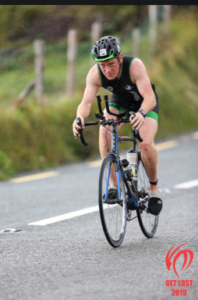 Not loving life in the rain

Unlike previous years i hadn’t spent myself on the bike and had left a bit in the tank for the run.  I took a slow transition, put socks on and stretched my back so by the time I left transition i was feeling relaxed. Then i needed a quick pee stop – too much energy drink on the bike – but at least i knew i was well hydrated and i went early to get the most benefit of an empty bladder.  At this point i was loving the pace and passing people, feeling comfortable within the parameters of 4:30 – 4:50 per km that Sean had set me.  I really felt that my nutritional plan was working so it was one thing i didn’t have to think about and my normally tight back was loose as well so i just decided to push the pace slightly and see how i coped.  This is the first year that i have appreciated the run route, previous years i was hurting too much to notice, but it really is beautiful with rivers, mountains and lakes. It’s along rolling country roads for the most part so not many supporters but the views make up for that.  The first 12km are also an out and back so you get to eye-ball your competitors and cheer on friends and colleagues which i really like.  Then you are on your own for the last 9km and a couple of the biggest hills to try and ruin your day. A long downhill takes you to the finish line which is hard on tired legs but the cheers and atmosphere guide you there along with the knowledge that you have just completed one of the toughest middle distance races in the UK and Ireland.

Verdict – All things considered i was delighted with my run.  Not only was it my fastest run yet on this course but it was also the most enjoyable. I put this down to a combination of good nutritional plan, appropriate training, holding back slightly on the cycle and setting a comfortable run pace.  All the better considering i hadn’t been running much before the race due to a niggling calf.  Indeed an unplanned visit to the physio the week before the race helped and whilst he told me to strap up the ankle for the race i decided not to. I thought it better to go all out than hold back and perhaps over compensate due to wearing strapping that i wasn’t used to. 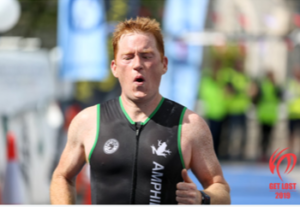 Knackered at the finishing line!

Unfortunately i had to get home so i had a 5hr drive to look forward to straight after the race. This prospect was eased slightly due to the fantastic treatment in the athlete area after the race. Lots of well deserved goodies along with massages, recovery seats, music and a great atmosphere.  I would have loved to stay in Kenmare for the night as its always great craic after the race but my family was calling.  Considering that i drove 11hrs over 2 days and raced a half ironman i felt pretty good and it was a very productive trip.  I was also very proud that Amphibia got to provide finisher backpacks and towels to competitors, which went down a treat.  The highlight since the race was meeting another competitor from this year.  He shook his head and said it was the most horrendous thing he had ever done, i just smiled and said yes and I’m already looking forward to Lost Sheep Triathlon 2020  🙂