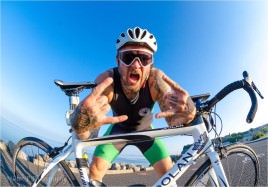 It’s been a while since my last blog and quite a bit’s been going on. Its less than 3 weeks to the Brutal Double Ironman kicks of so its getting exiting and nerve wracking at the same time. The bike distance was playing on my mind as the furthest i’ve cycled in one sitting is about 175 miles and knowing the double brutal is 230 hilly miles i just wanted to do a similar distance to put my mind at rest so i decided to cycle to Dublin to see my girlfriend Ciara.

Last year i walk/ran the distance with a heavy rucksack on and it took me 6 days so cycling it would be far easier and quicker. There’s a ferry that leaves fishguard at 2.30am so i decided to leave Cardiff at 4.30pm and hit the road. To cut a long story short i was messing around filming and didnt realise the time so had to turn the heat up to catch my ferry on time so started peddling like a loonatic. Around by the Swansea area the A48 breaks up a bit so im trying to navigate via my maps on my phone and going the wrong way along with being greeted with quite a few steep hills and it was about this time my arse was starting to get red raw which didnt help what with the weight on my rucksack hahaha. All i kept telling myself was that its all good training for the brutal. I eventually joined the A48 again heading for Camarthen and it was around this point where i didnt think i was gonna make it so started phoning Ciara to look into ferries from another port etc but that wasnt happening either so it was more or less head down and keep trucking and if i missed the ferry id have to catch the next one in 8 hours time hence why i didnt want to miss it. It was pitch black by now and i was on the A40 with my mind starting to go a little sideways due to running out of nutrition and drink (if you cycle you’ll know what i mean) so it was pretty dangerous and all i was hoping was that there’d be a garage open to fuel up very soon and luckely there was so a load of lucazade, snickers, bananas etc down my neck as quick as possible and off i went again. I know its summer time but its lucky i looked at the weather as it was only 1 degree so i made sure i had gloves and the right kit or i would have been up sh1t street. The closer i got the more i realised that every car passing were most prob on their way to catch the same ferry as me and every lorry that passed i proper sh1t myself hoping that they’d seen me. I had a huge high viz backpack cover along with lights but still it didnt stop me from stiffening up every time one passed.  Finally I saw the sign that said Fishguard 5 miles ahead and i arrived with half hour before the ferry was to sail and im sure i was the happiest dude at the port. I checked everything in and took a seat at the bar as there were no cabins left so enjoyed 2 pints of Guinness and got my head down for 2 hours.

Arrived at Rosslaire at 6.30am and started my ride north hugging the east coast of Ireland but before i did that i got a decent breaky to fuel my ride. Riding in Ireland is great, the roads are smooth plus you have a huge lane to cycle in so i was enjoying it apart from the agony my raw arse was giving me……..i must get something something to stop that rawness haha. It was meant to be raining but somehow escaped that but considering the distance and only 2 hours sleep i was feeling grand apart from when i got to the outskirts of Dublin where i got lost and once again ran out of nutrition but in the end got fueled up and arrived outside my girlfriends house after 18 hours of riding and 220 miles and now a little more confident about the brutal bike course.

The only thing im really lacking training wise is my running due to my knee playing up a lot. Luckily a company in cardiff called Agile Therapy have offered their services and have told me that its my IT band rubbing on my knee due to all the running and training i’ve been doing on it. I had a foam roller in the house as i had the same problem many years ago when i ran JOGLE (Lands End to John o ‘Grotes) and it sorted me out but over the years the foam has gone soft so i bought a stiff roller from Agile and it honestly worked wonders. One min i can hardly run and in pain the next im running normally with no pain at all. Any runner out there who has this problem before you’ll know what im on about along with how painfull it is to roll your leg out on the things too, i almost screamed the house down he he he. I visit Agile once a week to flush my legs out and fair play to David, Nathan & Natasha they’ve been great.

3 weeks till the Double Brutal kicks off at Llanberis in Wales and im pretty much 80% ready for it. I could have done without the 3 weeks of not running but thats the nature of the beast and you just get on with it. I have now got a few days full training and then 2 weeks of tapering before the event.  To top it off my Amphibia Tri suit turned up a few weeks ago and its seen some wear already and fits like a glove. If you are coming to the Brutal event i’ll be the one in green & black………….Nice one Adrian boyo.

I’ll write another blog just before the event. Until then toodle pip

Ed: Enjoy the taper Pritch, good to hear you got the knee sorted out! Cant wait to hear the event blog 🙂 For more details on amazing Brutal events check out their website here and get training!