Well its been a good few months since i gave you my first blog for the mission i have ahead of me which is the double Brutal www.brutalevents.co.uk/the_brutal.html . Its been an interesting 3/4 months of fitting training in between gigs, work etc and at the same time entering a few events. To tell you the truth i’m very lucky when you think about it as i dont have a wife and family to look after so to be honest i have quite a bit of time on my hands. I do however take my hat of to those who have a full time job & a family to look after whilst fitting in their training before everyone wakes up and when their all in bed.

As budding triathletes we all know that training in the winter can at times be a pain in the arse or shall i say hands, feet, head, face toes blah blah blah the list is endless when it comes to driving freezing cold wet days on your bike but hey ho thats what separates the men from the boys. Yet we still go out day in day out training no matter what the weather but it’s that feeling we get when we arrive home have a shower and chill out with your body pumping with endorfins and having that feel good factor pumping through your veins that makes it all worth while. We have been pretty lucky this winter as i’ve found the weather hasnt been as bad as previous years but then we all go out at different times and we all have different experiences.

I had a 3 hour ride planned for a Sunday and i knew it was going to be a windy wet one at about 11am so went out early hoping to miss it but lo and behold i got caught in the thick of it. It was ok to start with then it just became bloody unbearable and wasnt much fun and to top it off i wasnt getting anythin out of the ride apart from a numb body in all places and i questioned if i had the early signs of hypothermia haha. I opened my Strava and was greeted with everyone banging on about the same experience haha. I put it down to a character building day. It’s now the middle of April and i think we can all agree we’ve got off to a blinder with some cracking sunshine which means off with them winter layers wooooo hooooo.

For anyone that doesnt know, this is the first time i’ve got someone to coach me for all my events which will really help for my double Brutal attempt. My brother has been with Mark Whittle for about 2 years and i could see a great improvement in my brothers performance so it made very good sense that i ask him if he’d coach me which he kindly accepted. I met up with Mark and he put together a 3 month training plan and thats what i’ve been doing since i wrote my last blog and so far so good. Dont get me wrong, i have missed the odd sesh here and there but shit happens so you just put it behind you and get on with it. Doing what i do especially if i have a gig the night before and wake up with a hangover only to read my training peaks that i have a 2 hour hill climbing sesh then you know its gonna be a killer hahahaha. I said to Mark when i first met up with him that i’m going to try my hardest not to let myself or him down because in the past i’ve been on 3 day benders and missed a whole weeks training. Lets be honest, when you’ve dedicated yourself to a mammoth challenge like the double brutal you must take training as seriously as possible or on the day you will pay the price big time. I know, i’ve been there on a few occasions, Ironman Wales being the worst of them all. A classic learn by your mistakes situation right there.

Now that i have structured training not only am i finding it much kinder on my body but im feeling much stronger in my swimming, cycling & running which can only be a brucey bonus. I’m currently training 6 days a week with one day off which is usually a saturday but we normally change it around due to what my calendar allows. Summer is coming and i have quite a bit of work abroad coming up so its just a case of juggling things around and making it work.

My season started this year with the Groundhog marathon which consists of 105 laps of an athletics track. I noticed Dai Woodsford (Cardiff dentist and Whittlefit triathlete) put something up on twitter regarding the event and it sounded right up my street so i went ahead and booked it. Personally i think it’s a great way to start the season with a full marathon under my belt so early on in the year and what a good marathon it was too. Ok, so running round in circles for a few hours isnt everyones cup of tea but silly little things like that appeal to me, it’s a perfect way to switch off and day dream of which i was told on many occasions by my school teachers i was very good at. On the day the weather was perfect really, nice and cool to start then the sun came out and it was pretty warm. I started off really well and i had some pace on me and i kept telling myself to slow it down a bit but did i??? no of course not, the usual “i’ll be ok” attitude was the rule as always and come 18 miles i knew all about it and slowed right down with legs that felt like lead haha. After  a few more miles a managed to get a decent pace again and finished with a PB of 3.34 which i was over the moon with. My full marathon times over the years of what i can remember are 4.10, 4.06, 3.45 and now 3.34 so im slowly but surely knocking the times down. Next i’ll be goig for sub 3.30.

Next event was the Merthyr half marathon. After years of the event not running they finally brought it back after a 20 year absence so it was great to be part of it. My aim was to get sub 1.30 but i knew it was gonna be a big ask as it was only 2 weeks ago i finished the groundhog marathon but i was gonna give it a good go. Again we had perfect conditions and i decided to go right at the front as i knew we’d be running along the Taff trail and its not very wide so i didnt want to have to push past people as it’ll only slow me down. It was a great route and pretty flat too and i was feeling good and again had a good pace on me but this time i knew it was only a half so i could keep it up till the end. Half way we started to climb a bit of a hill then turned round a corner to face this really steep tunnel which went under the A48 then a quick left at the end of it only to be welcomed with another steep hill………what a beauty haha. It’s safe to say it took me a good 3 miles to get over that and get into a good pace again. All in all a great half marathon and finished with a PB of 1.34 so i cant moan. Looking forward to next years already.

After 2 events so close together my legs were shot to bits so i gave fellow skateboarder @king_morg (twitter) a bell and he came to iron out all the knots in my muscles of which were many. Sports massages are not meant to be enjoyable and i was close to screaming point with this one. it was done in the basement of my tattoo & barber in Cardiff so you can imaging the looks on the customers faces when they could hear the screams and grunts haha.

So, 2 events under my belt already and the next one is the Slateman Triathlon up in Snowden in exactly the same area as were the double brutal will be in Sept so it’ll be great to get a feel of the lake and the roads while i’m here for this event. I’ve entered the “Savage” and you can find all the info here www.snowdoniaslateman.com . I’ve spoken to someone who has done this event and apparently its a great event and pretty hardcore, really cold lake, hilly bike and a hilly run so i’m in for a treat. After finishing that it’ll be head down and full focus on the double brutal attempt which i’m really looking forward too. 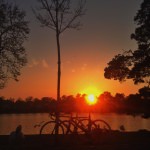 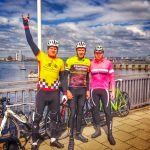 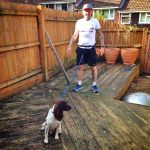 Even the dog doesnt escape!

I think thats it for now. happy training all and hopefully see some of you at these events.