To cut a long story short, back in 2006 after quite a few years of hardcore partying and traveling the world filming Dirty Sanchez i took one look at myself and realised i had to do something with myself quick as i was bloated with alcohol, looked yellow and generally looked a state. Don’t get me wrong, i had fun doing it but it’s not where i wanted to be. I was a skateboarder for many years so i was generally fit but as soon as Dirty Sanchez hit the screens i went mental partying.

I decided that i’d start training for my second Cardiff half marathon (did my first one when i was 15) and as you can imaging it took a good while to get my running legs back plus i was still smoking 20-30 a day so it was’nt any easy feat. I managed to finish around the 2 hour mark and every year since i’ve entered, once dressed in a full fireman outfit which at the 3 mile mark questioned what i was doing hahahaha, it turned out to be one of the toughest things i have done.

I’ve entered the London, Dublin and Amsterdam marathons along with a 50 mile ultra marathon from Brecon to Cardiff plus i’ve ran from John O’Groats to Lands End in 30 days running 34 miles a day. I also cycled it finishing it in 8 days.

After running and competing in the above i’d always wanted to enter an Ironman event and when a friend sent me a youtube clip of Rick & Dick Hoyt which is a story of a father who swims, cycles and runs his disabled son the whole Ironman distance it inspired me so much i instantly went onto the ironman web site and entered Ironman UK along with my brother Adam and 2 friends which is held at Bolton near Manchester.

I really enjoyed training for it and knew that when you’ve dedicated yourself to such a feat of physical endurance there is no messing around and you do really have to get your head down and train or there is no way you’ll finish it.

When the day of the event came i’ll never forget how exited and nervous i was waiting to jump into that lake to start the swim, my body and mind were rushing with all kinds of feelings that i cant really explain in writting, so much so it became quite emotional which didn’t help my breathing when i hit that water let me tell you. After 13 and a half hours i finished and never felt such achievement before, i was buzzing and from there on in i was loving triathlon.

I entered Bolton Ironman once more but with very little training due to a hectic touring schedule so finished it in 15 hours, considering the lack of training i was happy with just finishing. I also signed up for Ironman Wales but spent the whole summer season in Ibiza organising my own boat parties and once again i didn’t have much time to train but there’
s no doing ironman Wales without training so i failed to finish. I then entered Ironman 70.9 in Galway Ireland which i enjoyed immensely and i also entered Ironman 70.9 in Mallorca last year which was most probably my fave Ironman race i’ve done to date considering the sunshine, destination and perfect roads…………bliss.

After entering and racing in all of the above it was time to up the distances and to see how far i could push this body of mine, at the end of the day we’ll never know what we are capable of until you push yourself to the limits. I did it on my skateboard and i did it partying so now its time to do it in swim/bike/run. Myself and my brother Adam Pritchard decided to do this huge Triathlon by swimming Britains biggest lake – lake Windemere then cycle over 250 miles south and ran 16 miles closer to our houses over a two day period.

It was one of the best and most intense experiences of my life, the swim itself nearly finished me off and the realisation that i had a 250 mile bike and run ahead of me was a mental feeling, if i didn’t laugh i would have really cried. You ain’t done until your body actually collapses, i know it may sound a bit stupid and OTT but its true. We both completed the event in two days absolutely shattered and very delirious but it was worth every bit of pain it threw at us.

My brother was signed up to do the Double Brutal event in Snowdon north Wales so the above Mega triathlon we did was perfect training for him and he asked me if i’d support him through the race as the rules state you “MUST” have a support team.  The big day came and in he jumped for the swim and his double brutal challenge had started and was looking at 2 days of non stop movement and in his case just 15 mins sleep…………5 mile swim, 230 mile bike and a 52 mile marathon accending and decending Snowdon too. The Bike consisted of 8 30 odd mile loops and i chose to do the last 2 loops with him then saw him up and down snowdon and helped through some of his run. After seeing what my brother went through and in my brothers words “its your turn next” it inspired me to enter next years event and i’m really looking forward to the challenge. 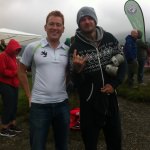 I met with Adrian from Amphibia on the day of the event this year and he said if your thinking of doing the Double Brutal event next year i’ll sponsor you so i picked up the phone and said i’m good to go. Amphibia was one of the sponsors of the Brutal Events and they do great triathlon, running and swimming accessories www.amphibia-sport.com . So thanks to Adrian and Claire from Brutal events http://www.brutalevents.co.uk/  they’ve sorted it for me to enter next year’s event and started putting the motions in for training but training full time starts in January as i’ve signed up with ex GB triathlete Mark Whittle who runs a personal training business WhittleFit whittlefit.com and has a great track record so i’m looking forward to working with him.

Have a good xmas all and i’ll keep you all updated on my training next year.