The Sandman Triathlon is a tough but very enjoyable race that I sponsor and compete in every year.  It’s without doubt one of the most iconic triathlons in the UK and after seeing it a couple of years ago on TV i just knew i had to get involved.   As the 2015 event drew nearer I got interested in the Sandman Savage.  The Savage entails competing the Sprint Triathlon on the Saturday and the Olympic distance on the Sunday and then your times are combined for an overall time.  Sounds tough but the race is certainly the ‘easiest’ course of the Always Aim High series of events (Slateman, Sandman, Snowman) so i thought would be a good one to try.  The weekend before the race  i had completed Ireland’s toughest Half Ironman “The Lost Sheep” in 5hrs so at least i knew i had plenty in the legs, but it was a new experience trying to pace energy and endurance across 2 events over 2 days.  It sounded like fun so i signed up! 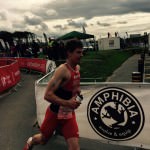 As usual my preparation was far from ideal – a late night ferry coupled with a short sleep in the back of my van, nestled into a bike and boxes of gear.  This was followed by being awoken at 6am with the sound of raining drumming on the van and then running around in the wet trying to get an Amphibia stand up, banners and flags sighted, nearly forgetting about breakfast and getting my gear ready and placed in transition before a 9.30am start… but thats the way all my races seem to go so at least my preparation is consistent! It also means no time to get nervous about the race so it has its benefits.

The Sprint course was a 400mtr swim, followed by a 25km cycle and a 5km trail run finishing with a few sand dunes and a beach run. Knowing there was much tougher to come the next day i was careful to pace myself so it was actually a fairly enjoyable race and the rain cleared away to give a dry cycle and run.  I wasn’t happy with my swim, positioning and sighting wasn’t great but short distance only took 10 minutes so no big deal.  This was followed by a decent cycle (42mins) and run (23mins).  Over the past year year i have found my cycling has improved (largely due to turbo training over the winter) but consequently my running has slowed as i tend to empty a lot more energy on the bike and have less remaining for the run which has always been my strongest discipline.  For this race however i paced well, felt strong and really enjoyed the steady pace on the trail run.  Happy to finish 1hr 18mins, placed 15th out of 300 starters with plenty more in the tank for Sunday i hoped. The most interesting part of the race was watching out for other athletes with race numbers in the 500’s as these were all ‘SAVAGE’ racers and my real competitors for the weekend.

Preparation for the Sunday race again wasn’t ideal, having a Vindaloo curry with the event team (couldn’t resist) followed by another night’s sleep in the van with rain beating down (oh the glamour of rural events).  The ‘Sandman Standard’ consists of a 1,000mtr swim, 60km cycle and 10km trail run, again finishing with some tasty sand dunes for tired legs.  The swim was bouncier than the previous day with difficult sighting and certainly myself and everyone around me went round the first buoy and headed in totally the wrong direction.  Nevertheless i was a bit happier with my swim and finished in 23mins.  The cycle was a long spin, but it did loosen out the legs and knowing it was followed by a tough run i took it steady and was happy with 1hr45mins.  As with a lot of longer races i also got to shout at a few drafters as this always annoys me.  Everyone tries to gain a few seconds in the course of a race, but if you draft for a few miles in a group you are cheats trying to gain unfair advantage.  Anyway, out onto the run and again i kept a steady pace, not wanting to cramp or blow-up with the toughest part of the course being the last mile, so finished the 10km in 44mins for an overall race time of 2hr55mins and 46th position out of nearly 500 people. 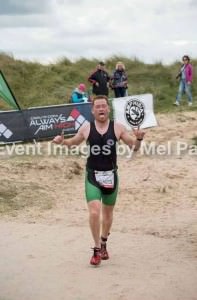 In terms of the Savage i was delighted to finish 6th out of 30 starters, with an overall time of 4hrs 14mins and the reward of a ‘I survived the SANDMAN SAVAGE’ tee-shirt.  http://www.tdl.ltd.uk/race-results.php?event=2110 As always with ‘Always Aim High’ the races were very well run with a great atmosphere.  I highly recommend the Sandman if you are looking for a tough but doable iconic UK triathlon in a beautiful location in North Wales.  I wasn’t sure how i would enjoy the Savage but it was one of my favourite ever race experiences.  It was challenging but enjoyable racing and pacing across 2 different race distances over the weekend with loads of support from the crew, marshals and supporters. Hats off to the organisers they have created yet another SAVAGE event 🙂

Next up it’s Snowman, i did consider doing the Snowman Savage until i looked at last year’s video and finishing times……….. i think just the standard distance race will do me this time!