Ive competed in the Slateman Triathlon for the past 3 years and I absolutely love it.  Im not sure which element appeals to me most – the cold lake, the tough hilly cycle or the tortuous trail run, but they all combine to produce one amazing triathlon, which has become one of the most iconic triathlons in the UK.  This is proven by the fact that every year this event attracts thousands of people from across the UK to Snowdonia very early in the season to take part.

Having completed the Slateman Full Distance for the past 3 years I wanted to push things on a bit this year so signed up for the ‘Slateman Savage’.  This entails doing the Slateman Sprint on the Saturday (400mtr swim, 20km cycle and 6km trail run) and the Slateman Full on the Sunday (100mtr swim, 51km cycle and 11km trail run) and times are combined to give an overall ‘Savage’ time.  Previously in 2015 I had completed the ‘Sandman Savage’ another of the Always Aim High race series and actually really enjoyed the experience, though its an easier course! You can check out my blog here from that event https://www.amphibia-sport.com/sandman-savage-an-iconic-uk-triathlon/.

So I set off for the race on Friday morning, with the family in tow.  I normally travel alone but ive told them so many amazing things about the UK’s Adventure Capital in North Wales and wanted them to get the chance to experience it themselves.  We stopped along the way in Newborough Forest – the setting for Sandman Triathlon – and got to Llanberis mid afternoon, giving me plenty of time to get registered and set up the Amphibia stand, banners and flags. You sometimes wonder if anyone notices your advertising hoardings but each year I get a few texts or mentions on social media when the races go out on TV so it must be doing something right! As well as my stand Always Aim High have a mobile store where they sell Amphibia gear so its great to have their support http://alwaysaimhighevents.com/store/ for our products.

We stayed in the Royal Hotel which is right beside the event field so is super handy. On Friday evening we took a spin into Carnaerfon which is a lovely town but not when its lashing. Myself and the wife opted for a Chinese ‘Banquet’ meal which lived up to its name and was hardly ideal race preparation but I thought better the night before the sprint, rather than the night before the Full distance race 🙂

So Saturday morning arrived and it was a wet one, not ideal for setting up the Amphibia stand and race warm up. My race preparation consisted of me ditching my gear into a wet transition (thankfully my cycling shoes and trainers were kept dry by my XBag waterproof pouch), squeezing into my wetsuit and running to the lake just in time for my race wave. Well at least it removes any spare time that could be used to get nervous!  The lake temperature had been recorded earlier at 12.8 degrees, it felt colder but that’s my own fault for not getting enough cold water swims in beforehand.  Anyway after a couple of minutes ducking, the face was numb and the hooter went off.  I have to say its one of the toughest 400mtrs I have ever done, but again this is my own fault due to a lack of swim training beforehand.  But then with an Ultra Marathon looming in 3 weeks I guess I could be excused for focusing on my running at the moment. The swim passed of uneventfully, if a little slowly and I was out onto the bike. When I saw the conditions that morning it immediately meant that I wasn’t going to have a fast time as im a fairly cautious cyclist at the best of times, never mind in the rain.  With the bike course being basically a straight up and down I was always going to lose time on a wet downhill, but when I know im not going to win the race I prefer to keep all of my facilities and skin intact instead of trying to gain a few seconds!  Due to the conditions and stray sheep on the mountain I never really relaxed on the cycle so lost a bit of time, but stayed upright!  So out onto the run and straight into a serious climb, which I like as I love trail running and hills but is always tough on the lower back muscles.  Anyway with two-thirds of the race to go on Sunday it’s a good excuse for pacing it out and not killing those legs.  The downhill towards the finish line was a nice excuse to open up the legs with a bit of speed.  Overall I was happy with a time of 1hr26mins and 28th place out of nearly 400 starters.  A good result for someone competing in the Savage event I thought… until I learned that the 3 top males in the Sprint race were all competing in the Savage! Bloody show-offs  🙂 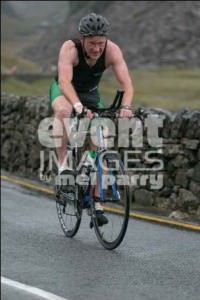 Sunday morning arrived and with it more rain! The lake temperature had lowered half a degree from the day before, doesnt sound like much but when you are swimming 2.5 times further and getting on a cold wet bike again it all adds up.  Thankfully I had a better swim, the practice the day before definitely helped and got some nice rhythm by drafting with a few groups.  On the bike I was glad i wore my toe covers, however my hands didn’t warm up until half way into the cycle and I normally don’t have any problems with the cold so I am sure others suffered even more. Thankfully during the cycle the rain stopped and a few glimpses of the sun warmed everyone up, along with a few nice flat stretches to build a bit of speed up. The hardest part of the cycle is knowing how much to empty on the bike whilst knowing there is a really tough hilly 11km trail run coming and wondering how much energy the Sprint race the day previously used up! Naturally there were a few people drafting on the cycle (aka cheats) as you see at most races, but a rough hilly cycle doesn’t benefit them as much. 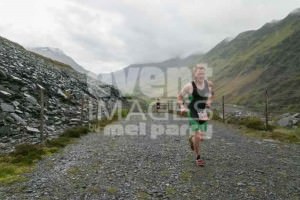 So out on the 11km trail run and I have to say I love this run but it is a killer! It starts off fairly flat for a mile then you are into the slate mines and a tough zig zag course to the top of the mines.  This involves a separate in-race challenge called the Quarry Man Challenge up through the heights of Dinorwig Quarry, but the views at the top are worth the pain.  In previous years I have burst a gut to run the whole way up and have managed it, but my legs have always cramped on the way back down! So this year I paced it a bit better and walked a couple of the steeper bits, which meant I was in better shape for the downhill run which was much more enjoyable. The quarry run is followed by a lovely trail run and then a step section through a forest, but there is a lovely point when you reach a height and get to see / hear the festival field below and know that you are nearly home.  Then it’s just a fast downhill section and up the long finish straight with hundreds of people cheering you and high-fiving – always a highlight of my triathlon year no matter what position I finish in and whoever gets that far has earned it!  I was happy with a top 100 finish in the Slateman Full and my times combined to give me a ‘Savage’ time of 4hrs 29mins and 13th out of 130 starters, a top 10% finish which is always my target 🙂 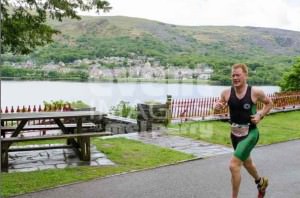 Opening up on the Downhill

Overall it was a fantastic event, superbly run and well marshaled as always.  The atmosphere in the festival field is always second to none, even when the weather is rubbish, but thankfully the weather on both days gradually got better giving nice afternoons.  A great weekend, super racing and always a bonus to sell lots of Amphibia gear as well. My recommendation is definitely stick this in your racing diary for next year, it’s one of the top UK triathlons and there are distances and challenges for all abilities and ages so bring the kids along too. Keep an eye out for the race on TV during the summer and roll on Cardiff Triathlon at the end of June and Snowdonia Triathlon on 30th July 🙂 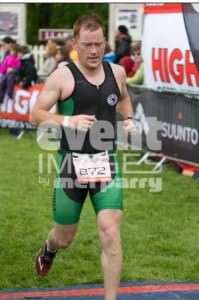