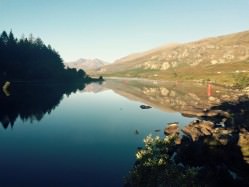 I love tough triathlons! When you aren’t that fast it helps if the course and/or conditions are tough and sticky to slow others down.  Ive competed in some of the toughest triathlons in the UK and Ireland over the past few years but now i can bear testament to the fact that the toughest of them all is the Snowman! It’s one of the Always Aim High series of events and ive done the Sandman and Slateman a few times so i wondered how much tougher it could be…… as it turns out quite a bit!

After completing a tough half ironman and the Sandman Savage (2 triathlons 1 weekend)  in previous weeks to the event, i was happy with my preparation and was looking forward to the race.  The morning of the race was foggy and cold (1 degree Celsius overnight) but eerily beautiful overlooking Snowdonia.  A 10am start allowed the sun to burn through and temperatures lifted by the race start.  The temperature of the lake didnt however and the Race Referee was forced to cut the distance from 1,000mtrs to 500mtrs due to a temperature of 11.2 degrees.  Some were disappointed but the average swimmers like myself were delighted! 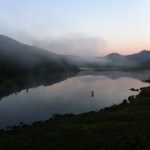 Thats Why they Call it Snowman

Two waves set off 5 mins apart, with myself in the second wave, without incident and the water temperature felt fine in a beautiful clean lake setting at Plas Y Brenin.  Quick change and off on the 70km bike section with the sun starting to heat up towards a high of 18 degrees.  A gradual climb for 20 minutes was followed by a steep and windy downhill, not for the feint-hearted as our Amphibia Ambassador Paul can bear testament to after falling off his bike on a bend, check out his blog here. After overtaking a few on the uphill i was happy enough to have a few brave fliers pass me on the downhill.  This was followed by a fairly flat segment and averaging a pace of 36km/h i was starting to wonder what the fuss was about.  I found out with a tight left turn uphill and a long steep climb, but this was nothing compared to the half way mark and a hill that just seemed to keep climbing and climbing with over 400mtrs upwards, the toughest part of a total bicycle ascent of 1,200mtrs. This then flowed into a beauty of a downhill with wide lanes, little traffic and smooth surface.  At just over 80km/h my front wheel started wobbling which is the most frightened I’ve ever been during a race.  Thankfully i managed to get slowed down without falling off but it was close and at one point i headed for the grass verge as that was my preferred landing point. The experience really knocked the wind out of my sails and i felt fatigue starting to creep in, but thankfully there was only a few hilly miles left on the cycle and these passed off without any incident.

A tough mountain run lay ahead but i love mountain running so i was looking forward to getting off the bike and stretching the legs.  No chance to stretch them however as its straight into a steep upwards climb which lasts for 5km, 700mtr vertically to the top of Moel Siabod. After the tough cycle my lower back had really tightened up and despite stopping a couple of times to stretch it wasn’t helping. I felt knackered and had to walk the whole way, urging myself to just keep putting one foot in front of the next.  I cursed triathlon, i cursed my body for letting me down but i kept walking.  Sheer stubbornness coupled with some caffeine gels kept me going.  Others passed me which normally would kick-start me into action but i really didnt care.  At least nobody passed me with any pace which showed everyone was hurting big time and it wasn’t just me!  Eventually i made it to the top and actually got to look at the amazing views on the way back down. As the body got a break from the tortuous uphill and the lower back began to loosen i was able to break into a trot and then a jog, which got faster as the terrain improved gradually going downwards.  I began to overtake people again and with a final burst of energy crossed the finish line with pain across my body but a smile on my face. 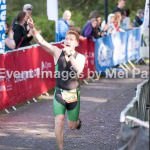 My aim was top 50 or under 4hrs so i was happy with 33rd in 3hrs 48mins.  I have the greatest of admiration for the people that managed to complete the Snowman Savage (Sprint on the Saturday & Standard on the Sunday). I enjoyed the Sandman Savage but ranked the Snowman standard race as tougher than the Sandman Savage combined.  Without doubt one of the toughest races i have ever done and one that very nearly broke me, in more ways than one.  But here’s the thing – thats exactly why i love triathlons and particularly the Always Aim High series – really tough races in amazingly beautiful places! Delighted to receive my hoody for completing all 3 races during 2015. 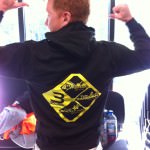 2 Responses to “Snowman Triathlon – Toughest Triathlon in the UK?”