That’s Why its Called ‘ Adventure’ Race

That’s Why its Called ‘ Adventure’ Race

I raced Quest Adventure Race Killarney a month ago without any dramas and was happy enough with my levels of fitness considering ive had a quiet winter ’babysitting’ our new arrival Mya. Quest Killarney was tough, cold, wet and fairly miserable and whilst adventure races aren’t meant to be easy for the distance covered that was one of the hardest I have ever done.  So I headed to the Wicklow Hills just outside Dublin looking forward to a warmer and faster race in Quest Glendalough.

As usual Amphibia was sponsoring the race so I was travelling and on my feet the whole of the day before the race for registration, but that’s fairly standard as was racing to the start line at the last moment, due to fixing banners and flags at the finish line. At least it stops me being nervous about the race as I don’t have time!  Well I got to the start line with a whole ten minutes to spare and it probably wasn’t a bad idea as it was a very cold morning so standing around waiting wouldn’t be top of my priority list. I was doing the 41km route, my excuse being that I needed to get back in time for work… not that I wasn’t fit enough for the 57km!

It’s a rolling start on the bikes which is a nice warm up and gives an opportunity to pass the few pleasure seekers at the front that really shouldn’t be there. Then it’s straight into a long steep uphill which is a nice wake-up call first thing in the morning. I was just settling into a rhythm and trying to get my breath about 1.5km into the race when disaster struck – my chain came off! Not normally a disaster but when you are on a steep uphill it is. So I quickly changed my gears to try and loop the chain back on but unfortunately in my panic I changed the back gears by mistake and that caused the chain to bounce off the back cog as well and get stuck behind the cassette. Naturally the rear wheel seized and I fell off, causing the poor guy behind me to also fall off (sorry fella!).  No damage caused so I quickly tried to prise the chain from behind the cassette but slowly it dawned on me that the chain was stuck fast and there was no moving it.  A couple of cyclists going the other way tried to help but to no avail, I only managed to take a chunk of skin off my thumb due to the bladed spokes – ouch! I then thought I could just freewheel back towards the start line but remembered my back wheel was jammed with the chain so I had to run and carry the bike back to the start area.  I met the next wave of starters going the other way and heard plenty of sympathetic comments but my main worry was that I wouldn’t get to race – what a waste of a weekend that would be! Thankfully a bike mechanic at the start area was able to get the chain freed and I was able to join the next wave of riders. I also realised that I had lost my mandatory race kit when I fell so had to beg for a plaster from a fellow competitor and had 2 minutes to try and get all of the chain oil and blood off my hands, what fun on a Saturday morning  🙂

So away we went on the next wave and my aim was simply no dramas this time.  At the head of the pack all was going well until about 5km in going up a steep hill when my back wheel started clanking.  I then remembered that I had taken the wheel off to try and loosen the chain and had never fastened it again.  Obviously the mechanic hadn’t needed to take the wheel off so hadn’t known it needed fastened. As it was pretty much all uphill to the first transition I decided to keep it going, hope for the best and I could tighten it when I was off the bike anyway. Thankfully I got there and was able to give it a good tighten. 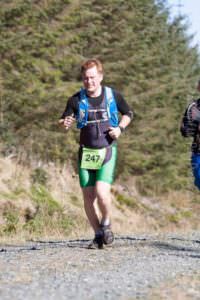 Me – Struggling Up a Hill!

Off on the 6km hilly trail run which would not normally present any problems but when you have climbed over 6km on the bike to get there its fairly tight on the legs and lungs. This trail run has spectacular views on a normal day but when you are on bog trails its dangerous to enjoy the scenery too much and I didn’t want any more mishaps! In addition, now that I was 2 waves farther back the route was more mucky and I had a lot more people to get past – not easy on mucky trails with mountain heather on both sides. So there was a lot of ‘excuse me’ and ‘sorrys’ but we all got through it.

So back on the bike and straight into what must be one of the toughest downhills in racing.  It’s very steep, undulating, rough in places and goes on for about 3km. After my previous bike adventures that morning I really didn’t enjoy this and also realised that the brake lever I had loosened to get my wheel off hadn’t been re-tightened so I was working with 1 brake – another school boy error! I just took it very easy and coasted to the bottom, with some people zooming past me but I was just happy to get there. I thought this was a good time to have a gel so I loosened my pocket but then had to avoid another cyclist who veered in front of me, meaning my gels fell out onto the road.  In hindsight the smart thing to do during an endurance race would have been to stop and get the gels and take the hit of a minute or so but at the time I thought every second counts just keep going. Luckily I had one gel remaining but this wasn’t going to be enough to get me though an entire adventure race. In this sport every race that I do I learn something and I will know better the next time! 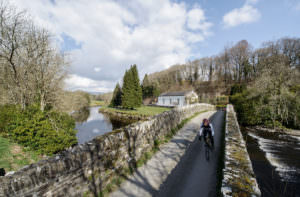 The rest of the cycle route was fine, with one more serious uphill climb and then pretty flat to the finish line. The roads were rough in places and on such a sunny day there was a lot of tree shadows across the road.  Again not the sort of thing that bothers you normally but just added to my cautiousness on the day.  Towards the end of the bike I felt drained and took my one gel, but as any experienced racer will tell you if you are taking it because you feel drained then it’s too late.  I was hoping to find some dropped nutrition in transition or along the run route but naturally it was the one time that I didn’t see any…. Just one of those days! 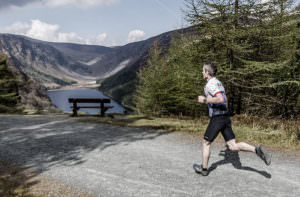 The run route is straight into an uphill path which climbs high above the Glendalough lakes offering beautiful views of the area and the finish line which you have to run past to get to the kayak, always tough on a drained mind.  But at that point you know it’s only a few km’s downhill and a quick paddle to the end. The 1km kayak was handy enough and the water was cold but exactly what was needed to encourage a last burst towards the finish line… and by last burst I mean a weary jog! Nipped in below 2.5hrs and far from one of my better performances but on a very trying day I was very relieved to get racing and finishing!  These are the things that happen sometimes in adventure races and they are part of the unknown quantity that makes us love this format so much. It made the thrill of the chase more heightened, the satisfaction of the finish more pronounced and was a good excuse to write a race review…. Done!! Great race, well organised, amazing views but blooming tough! Roll on the next one  🙂