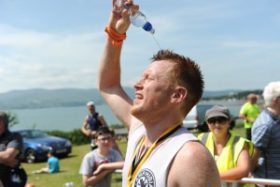 It has been an interesting few weeks since my last blog. This review took months instead of weeks, but things have been busy!  Our new little fella Eoin arrived and he has filled the house and our lives with love and joy… not so good for training however 🙂  This was fully expected of course and was one reason i was so interested in utilising a coach to maximise my limited training time. I have managed to maintain approx 6 – 7 hours training a week with a couple of small dips but fairly steady.  As life has become more hectic than ever i have really noticed the restorative effects of training on the mind, it really is an outlet for stress.

To pick up where the last blog finished off – my previous small injury ended up lasting quite a few weeks and whilst never fully pinpointed it appeared to be sciatica nerve or similar.  A few trips to the physio did little to help, so it was a mixture of rest and stretching that finally shifted it.  With Sean from Infinity Peak Performance‘s help we focused on cycling and swimming for a few weeks and then I also resorted back to my comfort zone of trail running to build a bit of strength and confidence back up before slowly emerging back onto the roads.  I believe the cause of the injury was bad habits and lack of stretching, along with absence of strength training or drills as part of my run training.

Since my last blog i’ve lost over 1 stone which was an added bonus from the volume and intensity of training. It was also due to cutting out treats and alcohol for 6 weeks, which ended with a bang and plenty of Easter eggs but has evened out again.  I’m now back to my normal 12.5 stone which helps with racing. I’m hopeful that by the time longer races come later in the summer ill be at my ideal race weight of 12 stone-ish. Every pound less knocks a few seconds off that finish time!

In terms of my best and worst work outs my best swim one is in the pool – a flat out length then rest of 20secs, doing about 20 lengths. This really works the stroke and is tough but you get enough of a rest to recover for the next one. Im still finding the open water swimming hard but i know thats just getting used to it after hardly being in the water for 2 years.  Ive no doubt il get back to loving the outdoor much more than the pool like i did previously! First few times i went swimming i forgot my ring protector so had to give my wedding ring to someone to mind. Sean tells me this is always a big issue when people are swimming in open water – just buy a ring protector people! 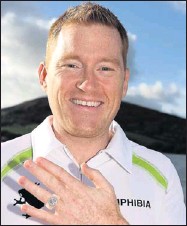 On the bike i still find the turbo trainer hard and i tend to sweat for about an hour afterwards.  For cycling i always know when i see VO2 max that its going to hurt and im probably going to feel a bit sick! But its a great work-out that you can feel the benefits from. My favourite cycle over the past few months was a cycle with Sean from Infinity on the race route a week or so before the race. Sean was able to show me a few race lines that made a difference on race day and it was a good cycle workout.

My best runs were trail runs to recover from injury, they really gave me confidence and built some strength back into the legs. I also had to focus more on retaining high heart rate (150bpm or more) on the flats and downhills and hold back a bit on the uphills which was something new for me. Toughest run was a short run of about 45mins which Sean had asked me to hit a heart rate for 20 minutes in the middle. Whether i wasn’t in the zone or still lagging from previous injury i found this very hard and had to just accept a lower HR which rose towards the end.

I have to say i was dreading this session in the pool with Sean recording my swim stroke! Swimming has always been by far my weakest discipline and ive really been ignoring it the past few years so i knew i was going to have a lot to work on.  However the session was actually very interesting, bordering on enjoyable! Sean was positive (which with my swim stroke is difficult) and with the help of video analysis gave me a couple of simple things to work on. During my stroke i was pushing down and up with virtually no backwards momentum to push me through the water… any wonder i wasnt going anywhere fast J Therefore i just have to focus on pulling backwards and keeping my head down a little bit more. Sean was brilliant making this all positive, simple and effective, i just have to put it into action now! Infinity are already well known for their swimming prowess with Infinity Swim Academy, Channel Swimming and now Peak Performance.

1st June: Crooked Lake Triathlon result – i was generally happy with the result finishing 4 minutes quicker than last year and moved from 50th to 35th with a higher standard of competition too due to the race being National Series this year. Plenty to learn and improvements to be made but happy with progress this far.

29th June: Belfast Titanic Triathlon Result – wasn’t happy with this result. It was 4 weeks later so i was expecting to see improvements on what i thought was a faster course. However my time slowed by 3 minutes due largely to a slow swim and bike. It just didnt click on the day, i made a few bad choices but i finished strongly with a 19 minute run. As a last minute training race the result wasn’t important but there was plenty to learn from the race. After 10 years of doing triathlons and nearly 100 races i’m still enjoying learning lessons from every race and i think that’s one of the big appeals of the sport.

After the Crooked Lake i was very hopeful about the season ahead but the Belfast result has knocked me back a bit. In fairness i had a very tough few weeks in work and at home which undoubtedly also impacted on the result and has left me feeling fatigued. Sean is quick to recognise the signs though and on a couple of occasions he has advised pulling back or just missing sessions completely. Sometimes, even though deep down you can feel it yourself you just need someone to tell you. Struggling on gets you nowhere but backwards, better to rest and come back refreshed.

With my first standard distance triathlon in 2 years coming up in just over 3 weeks im looking forward to it.  A longer race generally suits those of us that aren’t that fast, particularly as it’s a tough course – Top of Mourne – that suits my strengths.  Then just 4 weeks after that comes my first Half Iron distance race in 3 years – Lost Sheep Triathlon.  I’m still interested to see what i can achieve if i can avoid further injury, if i can maintain current weekly training output and if my wife Aileen retains her current levels of patience!  I’m consistently impressed with Infinity’s planning, training detail and assessment so i would like to translate it into race performance. But then that’s ultimately what this whole ‘experiment’ was about! Ive certainly been persuaded that having a coach is very beneficial in a number of ways, whether or not you are working with limited training hours.  However the key performance indicator has to be race results so im hoping these will translate over the next few weeks. 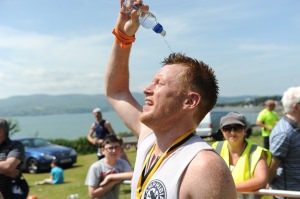